This one turned out to be our most successful camping trip yet. Four tries in and we’re finally working from a camping checklist and managed to pack all the essentials … almost. Lesson 08 — when checking off your camping checklist, make sure each item actually IS amongst your gear. But more about that in a moment. :-)+)

Even though this campsite was the furthest from Brisbane we’d been on our camping jaunts, the only thing we needed to pick up on the way was firewood, so we had time to stop off at the beautiful Mary Cairncross Scenic Reserve in Maleny. This place is special for another reason — in May 2005, J and I planned to get married in this marvellous sub-tropical rainforest. But we got hit with torrential rain, so we had to content ourselves with standing in the doorway of the information centre instead. The rainforest is still behind us in the video — but, admittedly, it wasn’t quite the same.

I wanted to get married beside the twin rose gums that are a feature of the forest. These things are awesome — about 500-600 years old and totally out of place. They usually do not grow in rainforest and the theory is that they started growing when the climate (and, therefore, surrounding forest) were quite different, but were well enough established to keep on going when the climate changed to support a sub-tropical rainforest. Two trees growing strong, independently, but inseparably fused at the base — a perfect metaphor for a successful marriage.
(click for a larger slideshow) 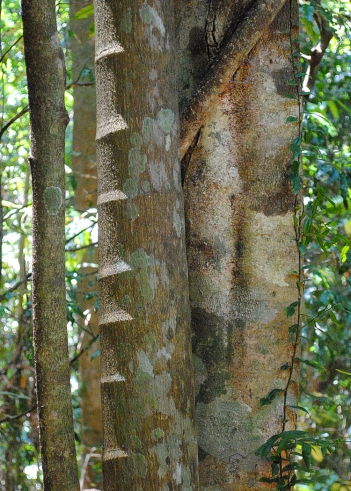 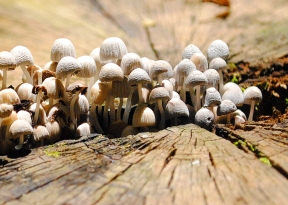 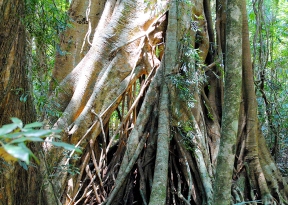 ancient fig — finally standing on its own two hundred feet

Charlie Moreland is a big campsite on the banks of Little Yabba Creek in Imbil State Forest. It is easy to get to and it has a fabulous waterhole — this makes it super-popular … which has its downsides. Crowding wasn’t a huge issue but the RUBBISH was — it’s unfortunate that occasionally you’ll be stuck with a site previously visited by feral-bogan-idiot-wankers. We collected a full bag of junk before starting to set up our site. Particularly disturbing was the stuff in the fireplace — glasses and bottles (partially melted), lighter fluid tin (burnt out), aerosol can (exploded) and a hammer head. And, of course, the fireplace was surrounded by stuff that could have been tossed in if only the wankers had tried — ring pulls, bottle tops, cigarette butts, etc, etc, blah, blah. But, as discussed in the last post, the bush has an amazingly calming effect — usually this sort of thing would send me on a psychopathetic rampage (yes, that spelling is deliberate) — but, instead, we simply filled our bag and put it aside — ahhh, peace.

our cleaned up campsite

After setting up and having the first crucial cuppa it was time to hit the waterhole. On our way we met up with the first of many lace monitors — basically harmless critters unless you hassle them (ie. poke them with a stick). This waterhole is a beauty — big, beachy, shallow bits, deep bits — perfect. We also ran into some friends from Ipswich — P and O — such is the popularity of this place. We spent pretty much the rest of the afternoon here : 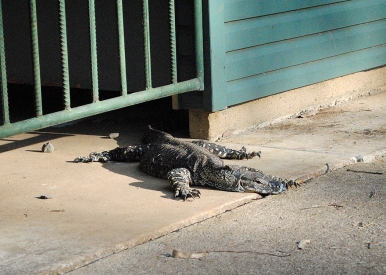 Someone had rigged up a rope swing close to our campsite (there’s often one of these) and E hung out there for a while before hooking up with another kid and going back to his campsite. This is another great thing about family camping — kids get a taste of the sort of freedom their parents used to have as kids — before parents learned to be so paranoid. I wandered down to check that it was OK with the hosts that E was hanging around and then left him to it.

So I got into finishing setting up the campsite and this is when I learned Lesson 08 (as mentioned above). Somehow we had managed to leave the tent poles behind. When I say ‘we’, I mean ‘I’ because I was the one telling E what to mark off on the list.

O … K … what now? Well, luckily for us, it was looking like a pleasant enough night and there were no mozzies about, so I just dropped one side of our shelter tarp to the ground to form a lean-to. E wasn’t too impressed with this solution and opted to sleep in the car. But he managed to freak himself out in there by himself and soon joined me under the tarp. This is actually a great way to sleep — not stuffy like inside a tent, we had a cool breeze refreshing us through the night. Lesson 09 — things not going to plan is just part of the adventure. It did start to rain a bit, but this sounded much heavier than it actually was and only added to the experience. In the morning, while we were eating breakfast, a big lace monitor walked right across our beds : 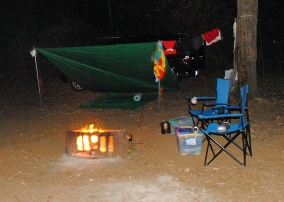 our improvised campsite — a new adventure

safe and dry under our little hootchie

E says : At Charlie Moreland we went swimming at the waterhole. I didn’t like the people stealing the log off me. I liked the fire twirlers. I made a new friend and played on his DS. A bush turkey tried to take our chocolate. There were a lot of lizards. We forgot the tent poles and dad and me made a new way to camp which was fun. I want to sleep like that again. There was a swing. The swing was fun. On the way there we saw an eagle and stopped where mum got married. There were interesting birds and nests and a giant wood moth where mum got married. And interesting statues. 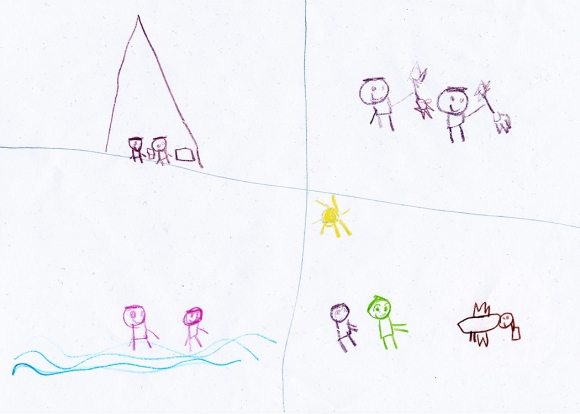 After breakfast we went for a short wander along the Little Yabba and Piccabeen track, but didn’t do the full circuit. On the way we learned about the Giant Stinging Tree. It looks like just another rainforest tree, but the leaves have tiny hairs that give an excruciating sting — the sting can last for months and has been known to kill horses. Awesome — even the plants in Australia can get you. Note to self: add women’s waxing strips to first aid kit. When we were packing up we noticed a jumping jack nest — it was interesting to see all the empty egg cases lying around — these guys are good little cleaners, but also really aggressive. As I was pointing to the egg cases, these little buggers were jumping up to try and bite me (hence the name). Glad they didn’t get me, like all bull ants, they hurt like hell. 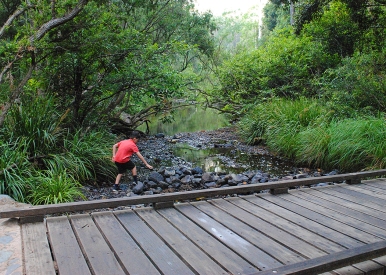 Charlie Moreland is easy to find — from Maleny we took the Maleny-Kenilworth Rd through Witta, Conondale and Booloumba. We picked up some firewood at the Cambroon Caravan Park. This stuff was so good we bought some more on the way back for next time. A few minutes further on is the turnoff to the other major camping ground — Booloumba Creek. Then a few minutes more to the Charlie Moreland turnoff — Sunday Creek Road. The majority of this is dirt — but quite wide, mostly flat and well maintained — easy going :